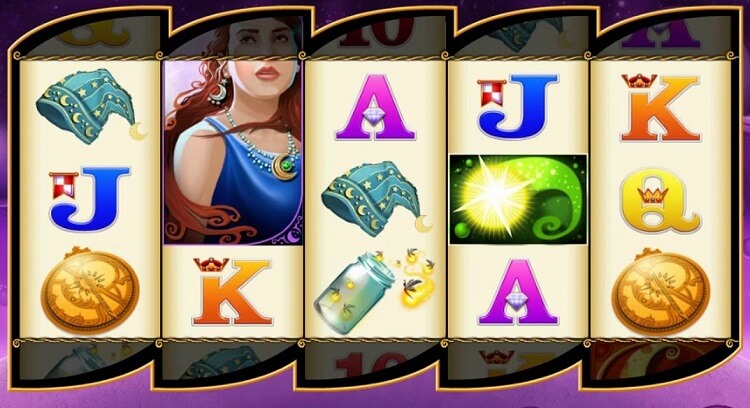 The Sea of Tranquillity slot game, created by Williams Interactive, is an online casino game, available now for desktop computer, mobile phone and tablet. The game is renowned for its remarkable visual design and interactive music, which are some of the best offered by modern slot games. The theme of the game is based on sleeping and dreams, represented by striking dream images that include a white owl, a ship on restless waters, a sleeping moon, and a beautiful woman.

The music of the game is mysterious and relaxing, brought to life when the player spins the reels. The music will keep playing as long as the reels are kept in motion, but will fade to uneasy chimes if the reels are left stationary for a few seconds. This intuitive and impressive design, both visual and audio, make the game a must play experience for both veteran and casual slot players, even if just to be impressed by the obvious effort that went into its creation. In terms of game play the Sea of Tranquillity uses a standard five reel, thirty play line system, allowing individual play lines to be selected. This provides freedom for players, and strategic game play experience.

Complimenting an already well-made game, Sea of Tranquillity features a selection of excellent artwork. The most valuable symbol is the beautiful woman, recognisable by the moon pendant around her neck. She pays out a good amount if matched five times, but a great deal less if matched the minimum of three times. Following her, in terms of value, is the ship on stormy waters, and the white owl.

This is followed by the golden compass, the jar containing fireflies, and the dream hat. The least valuable symbols are the standard ten, jack, queen, king and ace of playing cards. It should be noted that Sea of Tranquillity is not a generous game as far as standard play is concerned, and the player must take advantage of the bonus features in order to make any real money.

The Sea of Tranquillity slot game has a number of interesting features, the first of which is referred to as the close enough system. This involves the edges of the play area, both above and beyond, where a small gap can be seen. If any of the main three symbols, the woman, owl or ship, can be seen in this small space, upon the reels coming to a stop, the symbols will expand to fill the reel and be counted as a wild. This can result in highly lucrative spins, but may be a bit difficult to fully take advantage of, given the randomness exhibited by the reels.

The second bonus feature is the two scatter symbols, the moon, and the green light. If these two symbols match with each other at least three times, in any space on the reels, instant bonus spins will be granted. The free spins will play out automatically, with all cash earned awarded at the end of the sequence.