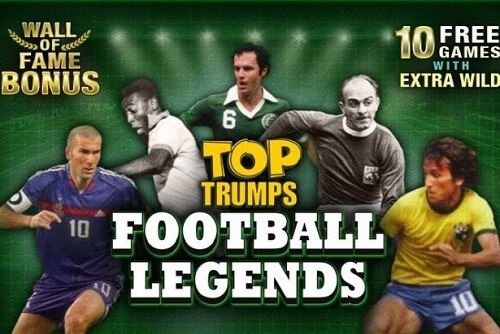 The average slot that is available both online and on mobile are all pretty much similar. Thus there has been a need for a slightly different kind of slot. Playtech filled this niche by creating Top Trumps Football Legends. This is a slot based on a set of playing cards which are in turn based on football or soccer players. The slot has the usual fifteen lines and five reels and a great wagering limit of up to 10 coins per spin which makes it an attractive choice for players of many budgets. Obviously this is a slot aimed more at soccer fans than the casual player, but due to its wide wagering limit and decent features it will appeal to players of many levels, who love soccer.

Almost all of the symbols from Top Trumps Football Legends are taken from the theme except for the very lowest ones which are from a deck of playing cards. The rest are all pictures of your favourite football players. There are five active symbols in base game aside from the playing card ones, as well as a wild and a scatter. The wild is the games highest paying symbol with the standing jackpot of 10 000 coins for five of them in a row. This wild is represented by internationally renowned player Pele. Next in line is Johan Cruyff with a 1000x your line bet for five of him in a row.

On the Ball Graphics

The graphics in Top Trumps Football Legends are pretty much all photo’s of soccer players, so are all realistic. There are no typical slot machine drawings, although the background is a depiction of a soccer field and not an actual photo of one. The over all colours of the game are green and gold, which represent a soccer field and supposedly the riches available for you to win. 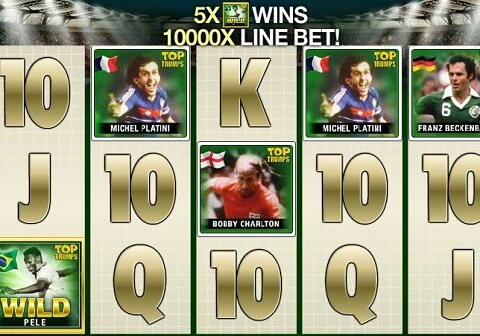 As mentioned Top Trumps Football Legends has a wild symbol that takes the place of all other symbols in the game except for the scatter and the bonus symbol.

The scatter symbol is the games logo. This will trigger ten free rounds should you find three or more of them anywhere on your reels. You will also be awarded with a multiplier that increases depending on how many scatters you found. During the free spins round you will be able to choose an additional symbol that will act as a wild. If this extra wild forms part of a winning combination, it will add an extra 4x multiplier to that win.

The last special feature in Top Trumps Football Legends is the Wall of Fame feature. This is a pretty basic little Pick Me round that is triggered by finding the wall of Fame symbol on reels one and five at the same time. Here you will be taken to a second screen that has sixteen pictures of football players on it. Each player hides a prize, and you simply have to choose them to reveal either multipliers or cash prizes. There is also a hidden pick again option combined with a cash prize that will increase your winnings even further. At the end of this round all pictures will reveal what prizes they had hidden beneath them.