Camelot Brought to Life in Excalibur™

Of all the slots titles devoted to the legend of King Arthur, Excalibur™ from Net Entertainment may be the most impressive. The five reels are framed in gold filigree, with candles burning either side. NetEnt’s attention to great artwork show in all the symbols, with the icons beautifully rendered and instantly recognisable by their predominant colour themes.

The Excalibur™ action is accompanied by a cheerful old-fashioned fife tune, and the sounds of a medieval castle. Each reel displays three windows, and there are 20 pay lines, which the player can adjust. Varying coin denominations and the number of coins bet allow the players to wager between 1 and 2,000 coins per line, with a maximum bet of 40,000 coins.

Even the Poker Symbols Look Impressive

Excalibur™ uses five poker symbols, but the card values are displayed as emblems on knightly shields, embellished with coat-of-arms crests. Each shield also has its own colour and totem; a grey 10 with a rose, a blue J with a helmet, a purple Q with a crown, a red K with a winged helmet, and a green A bearing a crowned eagle. Prizes are in the usual range, from 2 coins for two 10s, 5 coins for any matching three sequence, and 150 coins the top prize, for five As.

There are six higher-value icons; all characters from the Excalibur™ legend. Arthur’s nemesis Mordred has the lowest value, paying 10 coins for three of a kind. In increasing value, next comes the sorceress Morgana, then the Lady of the Lake, adulterous lovers Sir Lancelot and Queen Guinevere, Merlin the wizard, and King Arthur himself. Arthur wins 750 coins for five matches. 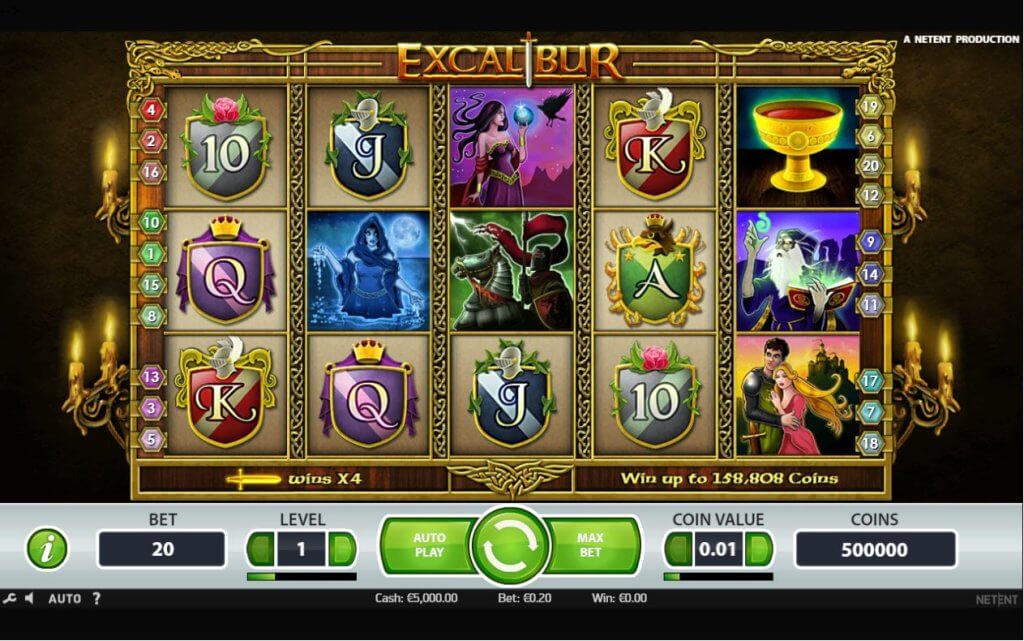 Predictably, Arthur’s enchanted sword Excalibur™ is the game’s Wild symbol. In base play, it doubles the prizes for any winning combos that it helps to create by substituting for the other ordinary symbols. If the Wilds form an unbroken sequence from Reel 1 on a pay line, they also win their own cash prizes: 10, 250, 2,500 or 10,000 coins for two, three, four or five of a kind.

A Golden Wild, the same Excalibur™ icon rendered in gold, can also come up at random on Reel 3. It can substitute for all symbols except the Scatter, including the regular Wild. Wins including a Golden Wild are quadrupled.

The final ingredient of the tale of Camelot, the Holy Grail, is the Excalibur™ Scatter. It pays an immediate multiplier prize if two or more come up in any position: a multiplier of X2, X, X25 or X500 on the total bet for the spin for two, three, four or five Scatters.

In addition, three, four or five Scatters will also activate 10, 20 or 30 free spins, respectively when playing at https://mobileslotscanada.biz/review/ruby-fortune/ casino. This feature cannot be retriggered during the bonus round, but it does apply a X3 multiplier to all wins during free spins. Along with the X4 multiplier triggered by the Golden Wild, this multiplier can make bonus rounds quite lucrative.